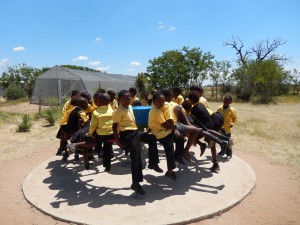 In February 2015, we visited the Free State Province of South Africa, and went to 11 of our PlayPump sites.  With the temperature hitting 42 degrees Celsius on most days we were expecting to find the children lethargic.  But we were amazed to arrive at school after school and find the children playing happily on their PlayPumps during the break. 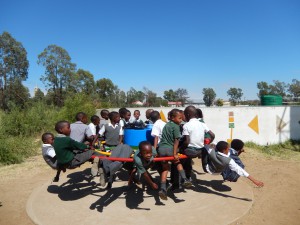 One principal told us “they are no longer fighting” they are now playing together, this PlayPump not only brings us water, but also brings us harmony in the school.  The children come to school early and leave later in the afternoon, so they aren’t getting up to mischief'”.

“Learners attend school on a regular basis because we have fresh vegetables to feed them every day; we do not struggle with water even if we don’t have electricity; the children really enjoy the water wheel; the eduction of the children is positively influenced because we used to send them home when the electricity has shut down since we didn’t have any other option; We appreciate what you have given us sincerely and from the bottoms of our hearts” 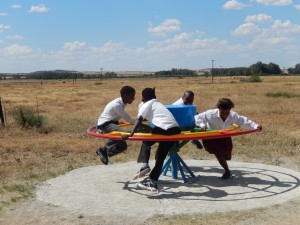 We even found at a school that had closed for the day and the majority of the children had left in the school taxi, that those who lived close by and stayed behind were still playing on their PlayPump.

Another principal B Lesesa of Toba Primary told us “The water wheel has made a huge change and impact in our lives, i.e. the lives of the learners and community as a whole.  In the past we had difficulties as far as water is concerned.  Sometimes there would be no water in the school and this resulted in a large number of learners absenteeism and learning because learners had to go their way and look for some water.  But ever since we had water wheel things have become even better.  We are really grateful”

There are still over 1,000 schools in South Africa that have no reliable water – Please help us to bring them water.