Three PlayPumps were recently installed the in the North West Province. 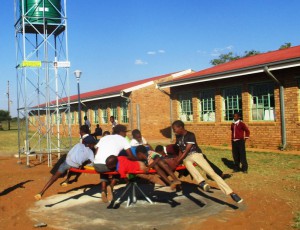 The school is in the bushveld region of the North West and there is a constant need for reliable water.  Prior to the installation of the PlayPump the school had to buy water.  This meant that the children hardly ever washed their hands because there was no spare water to do so.  Water for cooking had to be purchased from the community and during the summer months the children were constantly dehydrated and tired.

After we had tested the borehole to make sure the water was fit for human consumption and thanks to a very generous donor, Lawrence’s Roundabout Well Appeal in the United Kingdom, we were able to install a PlayPump. 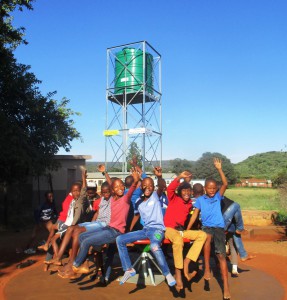 One of the other schools, Menwe Primary has  487 children and 15 educators. The school is near the border with Botswana, a very dry area, especially in the winter months. The school had an electrical pump, but it often broke and also they could not afford to pay for the electricity, so frequently they went without water.  The principal said that the PlayPump would be an ideal solution to their water problems, especially as the cooks would no longer have to go into the village to collect water.  Sometimes the educators had to take their cars to go and collect water which took up valuable teaching time.

As the children play water is pumped into a 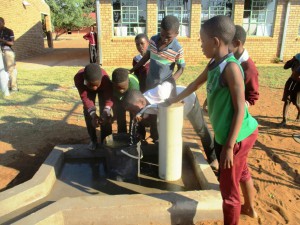 storge tank to be used immediately or at a later date.

We are hoping to put another 25 PlayPumps in at schools this year and any donation towards this or the maintenance of our existing PlayPumps would be greatly appreciated.