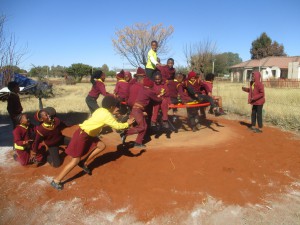 Vlakfontein Intermediate School in the Northern Cape is a large school with 498 boys, 458 girls and 38 educators. Their electric pump broke and they had to buy water from the municipality at a cost of R3,000 per month, which they could ill afford.

Thanks to generous support from an American organization we were able to install a PlayPump at the school in July this year.

The school will now have reliable water to drink, cook with, wash hands, clean classrooms and hopefully start a vegetable garden with which to feed the children. 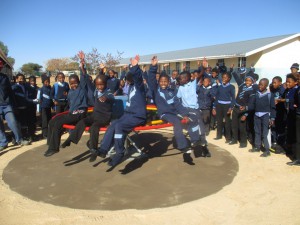 Another school in the Northern Cape received a PlayPump from the same American organization.  There are 432 children and 16 educators at Ditshipeng Intermediate.  Their electric pump broke 4 years ago and they were unable to pay for it to be mended.  Lack of water resulted in their vegetable garden dying and they are very keen to start another one to help feed the children. 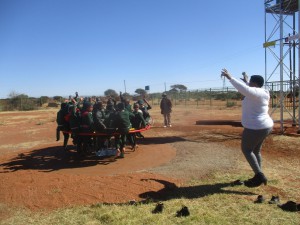 Makame Primary School, in the North West Province is a small school which uses pit toilets and relies on water deliveries from the local municipality which are not frequent, so the children had to bring water from home, which was never enough.  There was great celebration when the PlayPump arrived.

There are numerous schools in South Africa struggling with having enough water to keep the children hydrated.  A donation towards a new PlayPump or maintenance of our existing PlayPumps will be of great help.  Sandra.hayes@playpumps.co.za