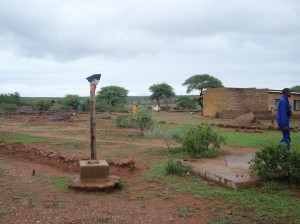 In February 2014 we visited Phatlihanyane Primary School. They had a borehole, but the windmill over the borehole had been broken for many years and the school was unable to raise the funds to put in a new pump.

This meant that the school relied either on the community borehole and the kids had to walk 1 km to collect the water, or else they would have to bring water from home.

Thanks to the generous support of Heather Richards and her family from Coyton in the United Kingdom we were able to give this school a PlayPump in May this year. 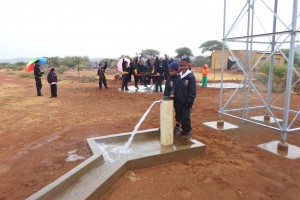 Even though it was raining the kids were out to inspect and play on their new piece of play ground equipment and at the same time were pumping water up into the storage tank.

The principal was delighted to be “independant” and no longer reliant on the unreliable community taps.

The kids now can spend more time at school learning. 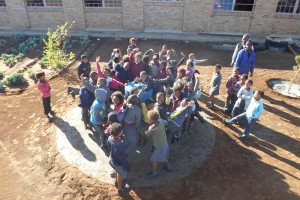 Our other installation was at Tsheang Thuto Primary School in the Dr Ruth Mompani District.  The ECIC insurance company has generously sponsored this and three other PlayPumps.  In February 2014 the school had told us that they often went without water for two to three weeks, resulting in the kids bring water from home, which didn’t last for the whole day.  To get more water they had to cross the road which was dangerous because of speeding cars. The principal said that through playing the kids will also learn.  It is impossible to over estimate the difference a PlayPump can make to a school.